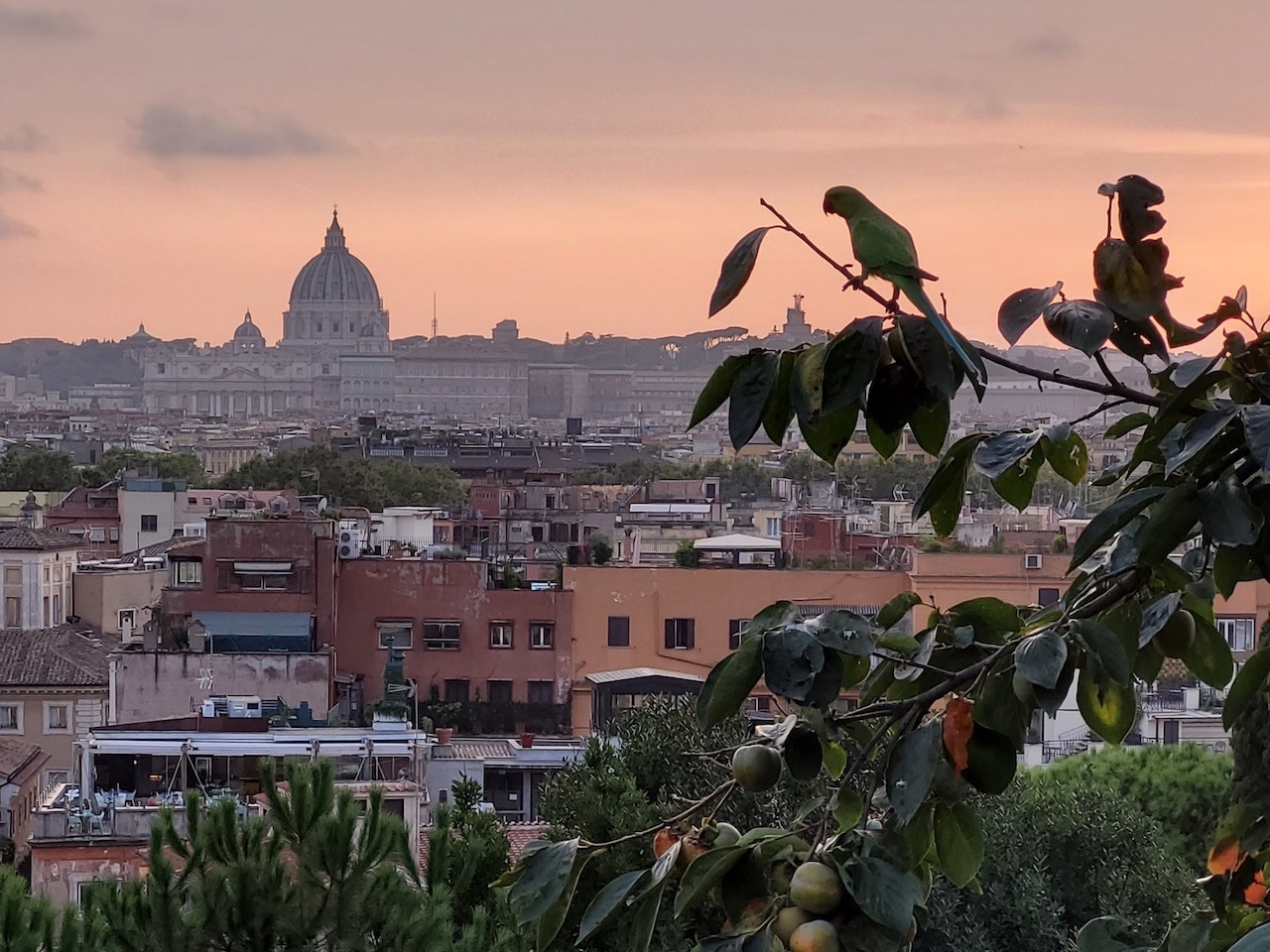 Rome sizzles in the summer and it's not just the thermometer! Following are a few suggestions on how to beat the heat while doing things not at the top of most tourists' lists.

Art, history, music, theatre and sporting enthusiasts never run out of places to go and at which to be mesmerised. And visitors to the Eternal City are especially well served from June through September. Read on to discover 22 Rome summer activities you can’t miss.

After exploring the well known ruins and monuments, relax in one of the most delightful places in Rome: the Villa Borghese Gardens. This favoured oasis in the heart of the capital is quite close to Hotel Gregoriana and boasts many claims to fame. Some favourites are listed below.

Reconnect with nature on a slow walk along the Viale del Lago with its 19th century Temple of Asclepius or rent a rowboat at the Laghetto di Villa Borghese. It is the best way to observe turtles, ducks, geese and even swans. Woody Allen fans may recognize this spot from the movie ''To Rome with Love.''

For faster paced movement in the Gardens, rent a regular bicycle, or even a ''risciò'' (electric powered pedal car or rickshaw) at Bici Pinico.

In another part of this vast green space, there is also a Segway scooter rental stand.

Still in the Villa Borghese Gardens, the Museo Carlo Bilotti boasts 18 modern art works by friends of the famed perfume magnate including de Chirico, Dali and Lichtenstein. Here, too, is one of only two works in Rome by Andy Warhol, an enticing portrait of Bilotti's wife and 12 year old daughter.

Each summer, the Casa del Cinema moves outside to its 200 seat theatre in the shade of the pines to offer movie buffs over 100 free film evenings, many in their original languages. This season, the venue is hosting six international festivals.

After dark, theatre also comes alive in the Villa Borghese Gardens. Take in a favourite Shakespearian play at the Gigi Proietti Globe Theater Wednesday-Sunday at 9pm.

Cool off at Rome’s Beaches & Pools

''Fa caldo!'' (''It's hot!'') is one of the first expressions to learn when visiting Rome in the summer. What better way to cool off than to go swimming, either in a pool or at the beach?

Both serious swimmers who want to do laps as well as those who merely dip to refresh themselves from lounging poolside will find what they are looking for at Piscina Belle Arti Flaminia. This facility is only a short tram ride from Piazza del Popolo, has an olympic sized pool with beautiful blue water and clean, well maintained facilities.

Younger aquatic enthusiasts will enjoy Rome's Hydromania. This famous water park can be reached by public transportation in less than an hour. In addition to water slides and wave pools, the complex also has restaurants, bars and retail stores.

For those who prefer the beach, several half or full day trips from Rome fit the bill. The closest beach town is Lido di Ostia, reached in under 30 minutes from the city center.

Here Romans escape the heat and chaos of the big city to jog, bike and ride horses. Some practice windsurfing and kite surfing which are ideal sports on this sandy and frequently windy coast. For boaters, the new marina at the mouth of the river Tiber, has room for more than 800 boats.

Also in the area, Ostia Antica deserves special mention. This archeological park is larger and better preserved than Pompeii, with its oldest structure, the Castrum or military camp dating to the 3rd century BC. Amazing frescoes and mosaics await all those who have not yet had their fill of Roman ruins in the capital. The word Ostia is a derivative of the Latin ''os'' meaning ''mouth''.

Santa Marinella is another seaside town, a mere 40-minute train ride and then 5 minute walk away from the big city. Here sunbathers will find golden brown sand with a backdrop courtesy of Castello Odescalchi.

Back in Rome, Villa Giulia on the slopes of Monte Parioli houses an extensive collection of Etruscan artefacts and art work. This fascinating civilization actually predates ancient Rome.

The villa itself was built by Pope Julius III between 1551-1553 on what was at the time the edge of the city. Even Michelangelo once worked here. An added plus is the two story Nympheum which delights all who venture here for alfresco dining during the warmest part of the year.

Once owned by Benito Mussolini, who added two bunkers, Villa Torlonia was bought in 1797 by Principe Giovanni Torlonia. This stunning museum now belongs to the Municipality of Rome and is located on the Via Nomentana. Interior and exterior design and decor depicting a variety of styles and tastes.

La Casina delle Civette, also set within the Villa Torlonia park, has undergone a series of transformations from Swiss chalet to mediaeval hamlet to the current House of the Owls. Elaborate early 19th century floor mosaics and the lovingly restored stained glass are other features not to be missed.

English style gardens and the overall park offer shade and a bit of organized nature in an unfrenzied environment. The Lemon House, the Medieval House, Casino Nobile and even the Old Stables are all worth a look. Time permitting, one could easily spend a day at Villa Torlonia.

Doria Pamphilj Gallery is an opulent 16th century palace and home of an outstanding art collection. Discover masterpieces by Velazquez, Titian, Memling, Raphael and Caravaggio alongside Bernini sculptures. To top it off, be awed by this jewel's own Versailles inspired Hall of Mirrors.

The Doria Pamphilj may be the largest still privately owned palace and gallery in Rome today. Please note the gallery location between Via del Corso and Via della Gatta is not the Palazzo Pamphilj in Piazza Navona nor the family's summer villa in Valmontone.

The Basilica Santi Quattro Coronati, near the Coliseum, is an outstanding showcase of mediaeval architecture. To the left of the main nave is a secluded 12th century cloister with a lovely same aged fountain in the middle.

Note that the original 4th or 5th century church on this land was burned to the ground during the Norman sack of Rome in 1084. The rebuild began soon thereafter and was finally consecrated in 1116.

The Aula Gotica frescoes which date from the 13th century but were only discovered by an art historian in 2002, can only be viewed during a bi-monthly tour. The apse frescoes from 1630 of the four patron martyr saints, Severo, Severiano, Carpoforo and Vittorino are also noteworthy.

Founded in 1869, the Campo de Fiori is the oldest and last remaining open air market. Tip: the market opens at 7am Monday - Saturday, so go early while it is still cool and there are fewer people. The neighbourhood itself merits a walking tour, too.

Campagna Amica Farmers Market near Circo Massimo is the place to go for many types of local cheeses, salami, olive oil and freshly baked bread. (Picnic anyone?) Romans bring their biodegradable bags and shop for organically grown fruits and vegetables here. This lively setting is only open on weekends.

Bonus Activities: Music in the City

For musical events, check out the schedules at Circo Massimo and the Olympic Stadium. Rossini and Bizet get top billing for Rome Opera House's summer season at the Terme di Caracalla.

Rome Comes Alive in the Summer

Yes, the temperatures soar during the Roman summer. But so do the number and variety of activities available during this first post pandemic season! Hotel Gregoriana is a great base from which to explore all of these treasures.

(Image and text by Marguerite Bravay, travel blogger and founder of Berlin & Around)